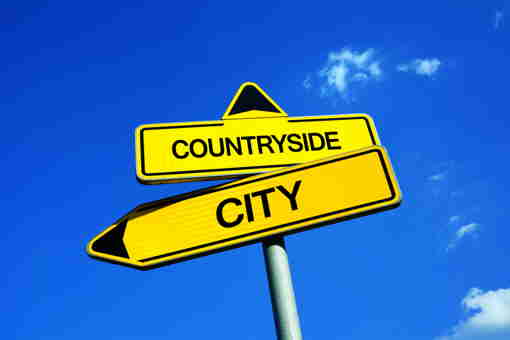 Moving to the countryside is usually dreamed up in idealistic terms as a transition to healthy, relaxing living, far away from the stressors of life in urban centres. Taking up country life after having lived in a bustling urban centre such as London can be quite the shock; you should ponder over the different aspects involved in making the transition carefully before making a final decision.

While moving to the countryside won’t act as the panacea it’s cracked up to be in country life magazines and the like, it is definitely a huge change of pace which comes with its own benefits and downsides. In what follows, we’ll take a look at some of the things you should consider before making the move from London to the countryside.

Perhaps you want to move to a bigger house following the birth of a child, perhaps you’re tired of the overcrowded and noisy nature of city life, perhaps you’ve been in London so long you’re fed up with it, or maybe you want to sell your house following a divorce and start a new life in the country. Whatever your reasons for moving to the countryside from London, this decision is likely to be one that will affect your life in a major way and should thus be treated with the utmost care.

Of course, location will be the main concern once you decide city life doesn’t appeal to you anymore. There are three options which all revolve around your preferred distance from a large city.

Some areas in the countryside offer the option of being completely secluded from the outside world; no pubs, no restaurants, no nights out. For some this might be exactly what they’re looking for. Writers who want to have the peace and quiet necessary for large scale projects will be particularly enticed by this option. Of course, the drawback would be that, unless you find a way of being completely self-sustaining, you’ll need to plan for trips to your nearest city or town in order to buy anything you need.

Being close to a city

Being close to a city means that you have the facilities of urban life close by (less than an hour away) but aren’t necessarily going to be dealing with the pollution, noise levels, and overcrowded nature of urban life. The drawbacks are obvious: your air won’t be as clean as it would be if you were further away from the city and there is always the risk of noise or commotion from the city bleeding into your area. This option is best for those who want to work in the city but live in the countryside.

Being within commuting distance, but having quite a long drive to contend with

Moving to a remote part of the countryside while still working in the city is great for those who don’t mind a long commute – although those who would benefit the most from such an arrangement are professionals or entrepreneurs who have the option of working from home. Moving to the countryside under these circumstances means being able to drive to a city if you ever need to but not having to deal with any of the disadvantages of city life on a regular basis.

Do you want to be near a city?

Being within commutable distance of a city is always a good idea; this minimises the disadvantages of country life (such as not having access to the same range of products you would in an urban centre) while not sacrificing any of the benefits such as less pollution and more space. However, which of the below options is right for you will ultimately be a matter of personal preference.

The good news is any place in the UK which you choose to move to will be cheaper than London. If you own a property in London, chances are you will be able to sell it, buy a a larger home in the countryside, and still have some money left over for other expenses. This difference in property price between London and the rest of the country is part of the reason why so many people have chosen to move from the UK’s capital in recent years.

However, one thing to consider if you’re moving to a larger property is the cost of maintaining such a home. As your house grows so do all of the costs relating to its upkeep. For example, if you’re moving from a central London flat to a house in the countryside, your utility bills will most likely be more expensive. It’s important to make detailed calculations before your move so that you’re not caught off guard by the extra expenses after you move.

If you own a house (as opposed to a flat) in London, you could even consider moving to a smaller property. We’ve talked before about the benefits of downsizing to a smaller home; this option could be attractive to some.

Those who have only ever lived in urban centres will be used to having excellent mobile phone and TV coverage as well as superfast broadband connections. Once you move to the countryside, this is likely to change. In most remote countryside destinations cell coverage is at a premium, meaning you’ll probably need to invest in a landline. However, TV will be available in most places and, due to the recent pushes being made in the broadband department, fast internet connections are becoming available in more and more place in the countryside.

If you need to work from home, or simply know you will be bored out of your mind with no internet, make sure you research the internet coverage in your area before moving.

Electricity and water supply must also be given some thought – not all countryside area will be connected to the grid. If you’re building your own house, check if utilities are already connected to the land you plan to build on. If buying, make sure the house has all the necessary connections or check how much it would cost to get them. Depending on the area you choose to move to, investments in off-grid energy choices might be necessary.

If you just can’t wait to move from London to the countryside, check out our tips on how to make your house sell faster. We’ve also previously analysed the best times to sell a property; this could prove useful if you’re not in a hurry to sell your current home.

Consider the points mentioned in this post carefully. While country life isn’t for everyone, those who do enjoy their move from urban to rural life report huge improvements in mood and overall perceived quality of life following the relocation.

We Will Buy
Your House
Please fill in this form for a fast quote.

Get Your
Free Quote

What our customers have to say

Fast Sale Homes pretty much saved my life. I was under tremendous pressure facing repossession. I could not sleep, my family was suffering, and the stress was starting to over come me. Fast Sale Homes bought my house in just over a week and I settled my debts. My family and I are now putting our lives back together and moving on. I am not sure I would have made it without Ed and the team.

My husband and I found our dream retirement home in Somerset, however we just couldn't find a buyer for our long term home in Barnsley. We approached Fast Sale Homes, and found ourselves ready to move and complete on both the purchase and the sale in under a month. The Fast Sale Homes team were super helpful and professional. I would recommend them to anyone.

The team at Fast Sale Homes helped me through a difficult time in my life. They helped minimise the time it took and offered me a fair deal, all the while being polite and professional. Thank you Fast Sale Homes.